Hair loss in men is mainly caused due to androgenetic alopecia which is also known as “male pattern” or “common” baldness. It occurs due to the effects caused by male hormone dihydrotestosterone (DHT) on susceptible scalp hair follicles. What DHT does is that it causes hair loss by decreasing the growth (angen) phase of the hair cycle, causing miniaturization (decreased size) of hair follicles which leads to finer and shorter hair day by day until they disappear completely. 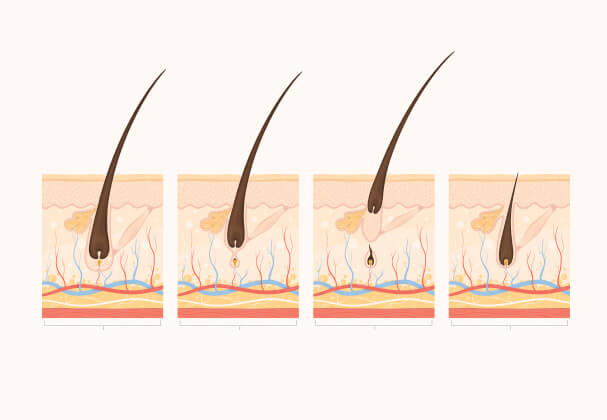 The Miniaturization of Hair Follicles
DHT primarily forms due to the action of 5-alpha reductase on testosterone, the hormone which determines the sex characteristics in men.

DHT has a very adverse effect on hair of men since it lessens the growth phase of the hair cycle, resulting to miniaturized (shorter size) of hair follicles, and thus producing hair that are shorter and thinner in length until these hair totally disappear.

If we look at the side of this patient’s scalp we observe that these hairs are not affected by DHT. There are groups of hairs that are fully thick (called terminal hairs) and there are a few fine, vellus hairs present at the spot. The pointer which is visible in the left image indicates the spot from where the close-up view has been acquired. Also, by observing the image above we come to know that the rear and side areas of the scalp haven’t experienced any DHT effects which also makes it an important location for obtaining hair for conducting hair transplant. These hairs are resistant to DHT effects and hence continue to grow in the same fashion as they were in their original position after a successful hair transplant in delhi has been done.
Example 1 – Permanent Zone

If we observe the thinning area above (marked by a circle), we can pretty well see that the hair are still present everywhere just that they have miniaturized due to DHT effects gradually over time.
If we observe the circle which is points to the centre of the scalp, we can see that extensive miniaturization has occurred at the spot and there are barely any hairs left. This is due to the action of DHT, which has completed reduced the hairs’ diameter and length that it appears like the area has gone completely bald.

All these examples given above point to the fact that actual balding takes place at a very later stage and that initially DHT which leads to miniaturization of hair follicles gives a pseudo effect that a specific area of the scalp has gone completely bald. 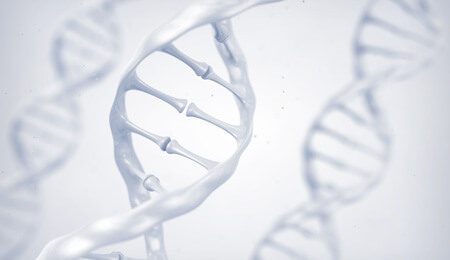 Though many doctors believe that ‘hair loss is primarily inherited from the mother’s side of the family’ yet the truth is that hair loss may be acquired from either of the parents. According to various studies conducted on the x-chromosome which is known to influence hair loss, it’s been concluded that inheriting hair loss is slightly higher from the maternal side as compared to the paternal side.

It’s been found that understanding genetics in male pattern baldness is more difficult than previously thought.

Recent discovery of androgen receptor gene (AR) which is found in the x-chromosome provides ample reasons as to why the hair loss pattern of a man is pretty similar to his maternal grandfather than his own father. But inheritance of hair loss is not only limited to the maternal side, there also have been cases in which men have inherited baldness from their paternal side. But there’s no clear evidence as to how this type of transmission must have occurred.

A gene is basically a single element of a chemically encoded hereditary instruction which is located on the chromosome and which comprises a small bit of the DNA. There are 23 pairs of chromosomes found in humans and every individual acquires one pair of chromosomes from each parent. It’s been found that hair loss in men is not the result of a single gene.

Primarily genes that are present within the X or Y-chromosomes are referred to as sex-linked chromosomes. The others present on the other 22 are autosomal in nature. Hair loss in men is not only the result of a sex-related genes but also autosomal genes (non sex-related). What this basically infers is that baldness may be acquired from either of the parents but not with some definite frequency.

Though many genes that are responsible for male pattern baldness have been mapped and identified yet still a lot needs to be discovered for limiting hair baldness in men. 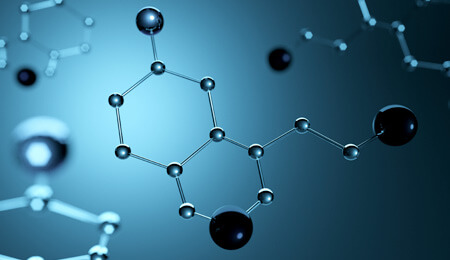 Hormones are those biochemical substances which are produced in different glands present within the body. These glands eject these chemicals (hormones) they produce directly into the bloodstream. Even the minutest of their quantities can have the most radical effects on the human body.

Testosterone is the primary male sex hormone present within men. What it basically does it that it leads to masculinizing effects on the body and is produced within the testicles.

This is the hormone that causes many changes in boys during puberty like the enlargement of penis and scrotum, sperm production, increase in libido level, change in the voice, growth of hair in the armpit and pubic regions, increase in mass of bones and muscles and change in body shape. Testicles also produce androgen dihydrotestosterone DHT which is another significant hormone responsible for sexual changes in men.

Except testicles, the adrenal glands which are located above each of the kidneys also produce androgenic hormones.

The hormone that results into androgenetic alopecia in men is dihydrotestosterone (DHT). It binds itself to special receptor sites which are present on the cells of the hair follicles to cause hair loss in men. It gets formed when enzyme 5-a reductase reacts with the hormone testosterone. There are two types of 5-a reductase enzyme i.e., Type 1 and Type 2. The Type2 variant of the enzyme is found in hair follicles which reacts with testosterone to cause hair loss.

According to researches it’s been proved that testosterone is responsible for growth of hair in axillary and pubic areas, whereas DHT is responsible for beard growth, hair found on torso and limbs, patterned baldness and hair found in nose and ears. The most interesting fact is that scalp hair growth is not in any way dependent on androgens whereas scalp hair loss depends primarily on androgens. 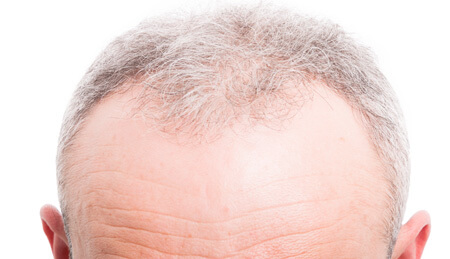 Hair loss is not primarily the result of some specific hormones or genes present within your body. Time factor also plays an important role in causing hair loss and baldness in men. It’s interesting to note that male hair loss doesn’t occur in a steady linear progression.

Neither does it occur all at once. It’s a process that follows an uncertain cyclical process. There is no fixed pattern to it. People experience hair loss which can be fast, slow or even steady. Though it’s unclear what are reasons for such a difference in hair loss speeds but it’s any day true that an individual will lose more hair as he/she gets old.

Though some individuals may never experience genetic balding, yet due to aging, some hairs may randomly start shrinking in length and diameter. This result in groups of full terminal hairs and miniaturized hairs giving scalp a baldish appearance. Slowly and steadily the miniaturized hair are totally lost causing baldness in individuals. Even the count of permanent hair slowly decreases causing baldness in old age. To deal with hair loss its best to undergo hair transplantation which is an effective way to restore hair growth even for patients who are well into their 70’s or 80’s.